skip to main | skip to sidebar

Save Our School Libraries -- Buttons and More 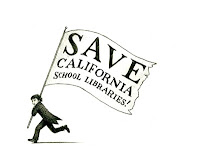 California, its public school, and its school libraries are having a meltdown. It is a crisis for our kids. So many teachers, programs, and positions are getting challenged to defend themselves in the face of incredible budget cuts and the law that requires balanced school budgets. That means thousands of pink slips go to teachers by March 15th, which means those teachers may or may not have a job the next school year.

In defending school libraries and staff, Marie Slim started a contest for a message and an image for a button. Tom Kahn created a Google survey form. Library supplier and CSLA "Best Seller" for Strong School Libraries, Pat Nelson of Mrs. Nelson's Books solicited several noted children's author/illustrators to design and make available an image. Marie created a School Library Advocacy wiki of the winning themes and images. "SAVE California School Libraries" by Brian Selznick is the winner by a wide margin.

Another popular theme is "Read. Think. Grow. Fund School Libraries". Wonderful versions are illustrated by Aliki and Marianne Wallace and Marla Frazee and are also available for use by library advocates. In all 16 designs were submitted. Here are the winners.

Yes, kudos to Marie Slim, Tom Kaun, Pat Nelson -- and all who voted! Here are some thoughts on what to do with the buttons.
It is a treat to be in the company of school librarians and advocates. Go to town on this campaign and make some noise! Go ahead, use the fine designs to creatively and actively advocate for California school libraries. Use the designs to make your own button, poster, t-shirt, billboard -- whatever!